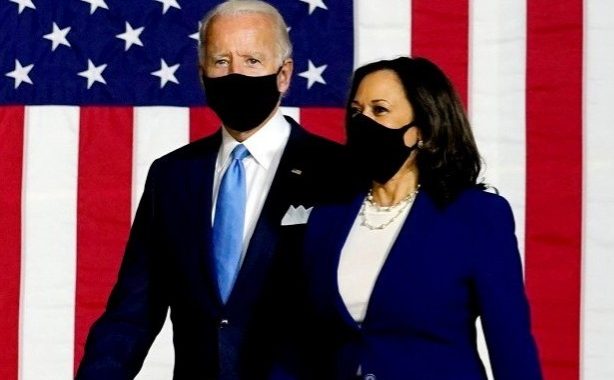 Joe Biden is calling for a nationwide mask mandate. “Every governor should mandate mandatory mask-wearing. The estimates by the experts are that it will save over 40,000 lives,” Joe Biden remarked after he and his running mate, California Sen. Kamala Harris, received a briefing on the pandemic from public health experts.

The former vice president said he would use the power of the executive branch to do everything possible to make mask-wearing in public a requirement. “We absolutely need a clear message from the very top of our federal government that everyone needs to wear a mask in public, period,” Biden said.

I’m certainly on board with Biden. It’s been several months since I started my #CorlessCares #MaskMission.  So far, I’ve donated more than 12K masks to those in need. My NewsMunchies brand was birthed by a desire to change cannabis laws and re-frame the conversation surrounding pot prohibition. That discussion will still be had here on NewsMunchies, but there are additional, important issues at stake that affect our ability to fight COVID and get our country back on track from a racial, economic, civil rights, and survival standpoint.

We’re off to the races and counting down the days till Election 2020. #DumpTrumpNov3 has begun in earnest. Recently, Joe Biden selected blue-state senator and former prosecutor Kamala Harris, who is the daughter of immigrants from Jamaica and India.

I strongly urge you to watch the Democratic National Convention beginning on Monday, August 17. Starting at 9 pm ET each night, the Democratic convention will be broadcast on all major television networks, social media sites like Facebook, Twitter, and YouTube, and streaming services like Apple TV and Roku. Basically, you can and should watch anywhere and everywhere. There are no excuses not to be an informed voter. The stakes are too high.

The convention will be condensed into two hours of televised speeches spread out from Monday, August 17, to Thursday, August 20. Former Vice President Joe Biden is set to accept his party’s nomination on Thursday night from his home in Delaware, rather than the original planned location of Milwaukee, Wisconsin.

Fears about the coronavirus pandemic and the potential to spread the virus even with a reduced crowd caused the Democratic National Committee to smartly cancel its in-person Milwaukee convention.

Republicans should listen to Republican John Kasich. “Take off your partisan hat and vote on the basis of what your conscience tells you about the future of your country, not just for yourself but for your kids as well,” former Ohio governor John Kasich said.

Kasich, who ran against President Trump in the 2016 GOP primary, will appear at the Democratic National Convention on the first night in what is being described as a display of unity and anti-Trump coalition backing Biden.

To show you what a contrast the Democratic National Convention will be from the Republican National Convention “celebration,” being held in late August, Trump said he’ll either deliver his speech from the White House or the Civil War battlefield in Gettysburg, Pa.  The Republican Convention has been mired with ideological and logistical challenges from the outset. President Trump was initially planning to accept his party’s nomination in Charlotte, N.C.; then that changed to Jacksonville, Fla., which was also subsequently canceled.

Republicans offer no plan, no leadership, and that means no dice. They can’t win the White House again. Don’t allow Trump to serve another four years. That would be an abject failure for our our children, our families, and our country.