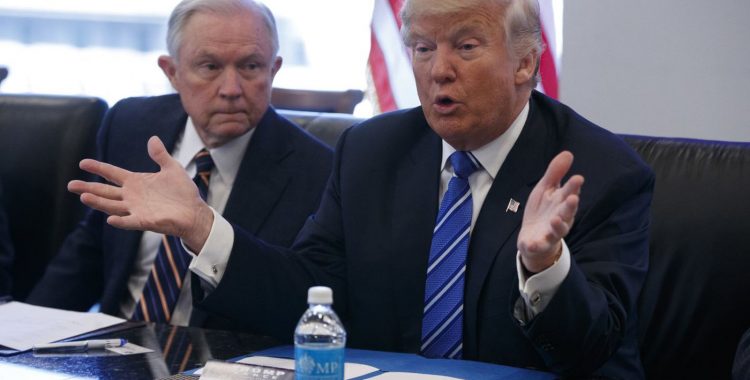 U.S. Attorney General Jeff Sessions vowed to toughen federal enforcement of marijuana, but he doesn’t have support from President Donald Trump. Marijuana-hating Sessions has ramped up threats of federal prosecution and has also lobbied Congress to reduce current protections for medical marijuana.  Will Trump follow his AG’s policies to their illogical conclusion and condone Sessions’s acceleration of the War on Drugs?

Trump has got a full plate, what with achieving world peace and all in North Korea. But that hasn’t stopped him from addressing the media about marijuana legalization at the White House before departing for the G7 summit in Canada.

Trump told reporters he would “probably end up supporting” the recent bill being circulated through the Senate by Republican Cory Gardner (Colo.) and Democrat Elizabeth Warren (Mass.) that would protect people who use cannabis as long as they followed state and local laws “legalizing” the plant.

“I support Senator Gardner,” Trump said. “I know exactly what he’s doing, we’re looking at it. But I probably will end up supporting that, yes.”

The president’s remarks place him in conflict with Jeff Sessions, an outspoken opponent of marijuana who allowed federal prosecutors to aggressively pursue cases in states that have legalized marijuana.

As states legalize, marijuana has remained a risky and unstable business because of federal law making it illegal. Concerns about federal law enforcement seizures have prevented most lenders from working with marijuana businesses.

To be clear, the Gardner legislation does not legalize marijuana however it would amend portions of the Controlled Substances Act. The bill states that buying or selling pot would not be considering drug trafficking. The bill in question would allow states to go forward with legalization unencumbered by threats of federal prosecution.

A lifting of the federal prohibition would bolster efforts to create uniform testing and regulatory standards for marijuana. Modifying the Controlled Substances Act may also allow researchers and scientists to pursue studies into the medical uses of marijuana.  Remember, a well-regulated legal substance is far better than a poorly-regulated illegal one.

Among its most important effects, the Gardner bill would give marijuana growers and sellers better access to the financial system and investors, which today is reluctant to deal with businesses at risk of federal prosecution.

There is no question Trump’s embrace of the bill is a blow to Sessions. In his tenure as AG, Sessions reversed Obama-era legislation by giving prosecutors more leeway in enforcing federal laws against the drug in states where it was already legal.

Gardner is hoping he can persuade more of his conservative cronies to join the crusade by framing the issue as one of state’s rights. Although, that has been done before by Senator Rand Paul and others. “This is a states’ rights issue, and the federal government has better things to focus on,” Senator Rand Paul of Kentucky said.

For Republicans, leaving the matter of marijuana legalization up to the states has been central to the party’s stance on many other issues, among them abortion, Obamacare, and gay marriage.

But leaders within the Republican party are staunchly against marijuana legalization, including Senate Majority Leader Mitch McConnell, who, last month refused to back Democratic Senator Chuck Schumer’s (NY) proposed bill to decriminalize marijuana. Lack of support from other Republican legislators could mean no reform bill can get the votes needed to pass.

If Trump ends up supporting a congressional effort to end the federal ban on marijuana, it would be a major step that would reshape the pot industry and end the threat of a Justice Department crackdown.

Who will live to fight another day? Based on the revolving door of White House staff, my money’s on Trump.