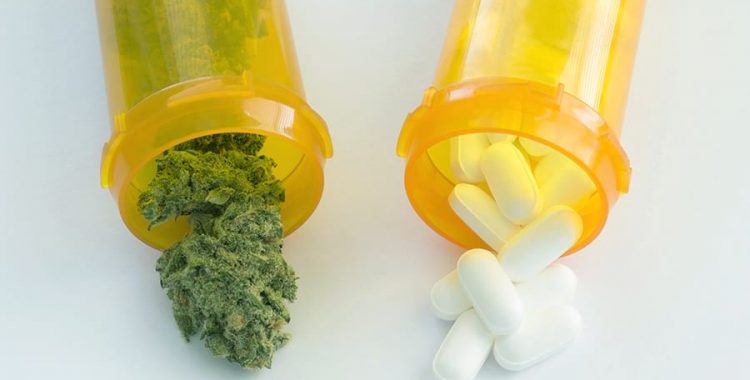 If you are an advocate – on any level – of marijuana legalization you need to know about the Journal of the American Medical Association. It turns out that states with medical marijuana laws had a 5.8% lower rate of Medicaid-covered prescriptions for opioids, a new JAMA study found.  Where marijuana is legal, opioid prescriptions fall.

Two papers published on April 2 in JAMA Internal Medicine analyzed more than five years of Medicare Part D and Medicaid prescription data. Researchers found that after states legalized cannabis, the number of opioid prescriptions and the daily dose of opioids significantly declined. One of the two studies found that people on Medicare filled 14% fewer prescriptions for opioids after medical marijuana laws were passed in their states.

In an article published in JAMA, HeFei Wen, an assistant professor in the University of Kentucky College of Public Health, asks the question, “Are medical and adult-use marijuana laws associated with lower rates of opioid prescribing for Medicaid enrollees?” The response is a certifiable “yes.”

“Marijuana is one of the potential non-opioid alternatives that can relieve pain at a relatively lower risk of addiction and virtually no risk of overdose,” wrote the authors of the study, HeFei Wen and Jason Hockenberry.

Drug makers for decades concealed the risks associated with opioids from the public, including Tooele residents, attorneys for the county argue in a complaint filed in Utah’s 3rd District Court. The lawsuit mirrors claims filed by dozens of other counties across the country that are waging a battle against Big Pharma. Defendants in these lawsuits include the drug makers as well as the distributors and retailers.

Cities, counties, and Native American tribes (being one of the hardest hit populations) have brought hundreds of federal lawsuits against makers of prescription painkillers, the companies that distribute them, and pharmacy chains that sell them. That makes the sharing of liability doubly or triply combative, with defendants pointing the finger at one another.

The typical argument goes that manufacturers aggressively marketed opioids and painkillers for years, despite knowing about highly addictive properties. Distributors shipped alarming quantities without reporting to the authorities. Then pharmacies like CVS ignored the red flags and failed to inform individuals of the health risks. The theories under which plaintiffs are suing include: fraud, racketeering, and violations of federal and state laws on controlled substances.

There is a War on Drugs but it isn’t necessarily the one you think of first. The War on Drugs is really the war against prescription painkillers and opioids. Presently the U.S. is ensnared in the worst opioid epidemic the world has ever seen. Opioid overdose has risen dramatically over the past 15 years.  Today, more than 90 Americans a day die from opioid overdose, resulting in more than 42,000 deaths per year, according to the U.S. Centers for Disease Control and Prevention. Opioid overdose recently overtook vehicular accidents and shooting deaths as the most common cause of accidental death in the U.S., the CDC says.

The JAMA studies found that states with dispensaries that are open for business saw the greatest decrease in opioid prescriptions, while states without active dispensaries saw a far less dramatic decline – about 7% instead of about 14.

Experts have proposed using medical marijuana to help Americans struggling with opioid addiction. The JAMA study compared opioid prescription patterns in states that have enacted medical cannabis laws with those that have not. It found that cannabis clearly has safer medical applications than painkillers. Marijuana has been shown to be effective in treating chronic pain as well as other conditions such as seizures, multiple sclerosis, and PTSD, according to the National Institute on Drug Abuse.

As you can see, there is a wealth of information to evaluate when considering alternative methods of pain management. The U.S. will continue to grapple with the opioid and heroin epidemic until and unless our leadership embraces the statistics that show the legalization of cannabis lowers rates of opioid use and abuse.