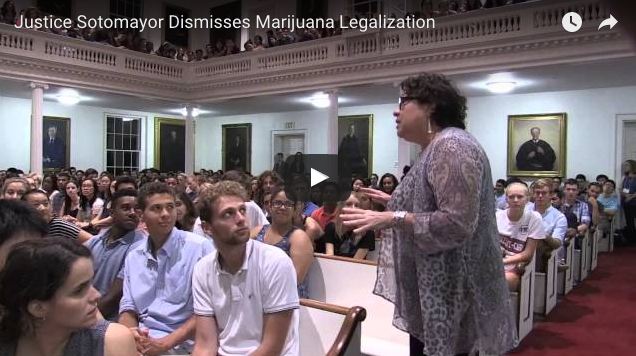 “The law is reason, free from passion,” opined Aristotle. Yet is there a legal argument worth making that is not reinforced by passion?

On the surface, Associate Justice of the U.S. Supreme Court Sonia Sotomayor is one hip lady. She attends New York Yankees games and leads the countdown to the New Year during the famous Times Square ball drop. But she isn’t exactly singing the same “Empire State of Mind” tune as those she would seemingly appeal to (Generation Y).

Obama-appointed Justice Sonia Sotomayor commented on marijuana legalization in a discussion at Amherst College on Sept. 8. She told students she really didn’t care what kind of thing they become passionate about, but maybe not legalizing marijuana. This is a bit bizarre but not shocking, and here’s why:

The Obama administration has taken a more aggressive approach than the Bush administration in closing medical marijuana dispensaries and prosecuting dispensary owners. These raids are going on to this very day, even in states where marijuana is legal under state law. Just this past week, it was disclosed that the Drug Enforcement Agency, in conjunction with the Bureau of Indian Affairs, raided the Pit River Tribe’s XL Ranch and the Alturas Indian Rancheria in California, seizing 12,000 marijuana plants.

“First of all it shouldn’t be young people’s biggest priority,” President Obama told Vice. “Young people, I understand this is important to you. But you should be thinking about climate change, the economy, jobs. Maybe way at the bottom you should be thinking about marijuana.” The president’s analysis is deeply flawed as marijuana has a myriad of environmental benefits and the sale of the plant is directly tied to large economic growth. The real danger lies in young people not making legalization a priority.

It’s not about the right to smoke pot; it’s about social justice and an end to the Drug War that has resulted in the mass incarceration of blacks even though whites are actually more likely to sell drugs and about as likely to consume them. Police have wasted taxpayer money enforcing marijuana laws in a racially biased manner. Arresting and incarcerating people fills prisons and destroys lives but does not reduce the availability of illicit drugs. Sounds like an open-and-shut case to me.

If we are to understand Justice Sotomayor’s comments correctly, we must necessarily believe that the Drug War, with its devastating societal and economic consequences, is something we should not be passionate about. However I cannot think of an issue impacting young people nowadays that deserves more action and supremely zealous rhetoric. Founding Father Benjamin Franklin commented, “If passion drives you, let reason hold the reins.” Franklin gets much closer than Aristotle to understanding the necessary relationship between logic and passion. I implore young people to let data, peer-reviewed studies, and commonsense drive their passion to legalize cannabis.