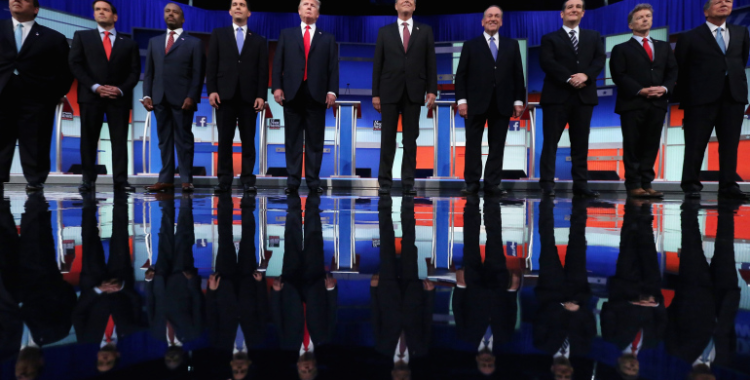 The purpose of a debate is to allow the different candidates to respond to the same question, usually a policy one, which will impact the presidential race and allow the public to test their ideas.  Abortion, same-sex marriage, the Iran deal, ISIS, and immigration were among the topics addressed Aug. 6 at a Republican presidential debate in Cleveland involving the top 10 candidates in polls as determined by Fox News.

Despite former Arkansas Gov. Mike Huckabee’s criticisms of the Iran nuclear deal and neurosurgeon Ben Carson’s invocation of the biblical concept of a tithe to illustrate a fair system of taxation, there was stunningly not one mention by conservatives of a key economic issue – marijuana legalization.

According to Republican rhetoric, states are “laboratories of democracy,” where experimentation should take place.  So then why has New Jersey Gov. Chris Christie said, “If you’re getting high in Colorado today, enjoy it.  As of January 2017, I will enforce the federal laws.”

In its most basic level, the party believes that the government’s role should be kept as low as possible, allowing the private sector and individual citizens to shape the state. Republicans ostensibly oppose any policies that are seen as interventionist, and that give the federal government control of industry.

The candidate’s viewpoints on cannabis at the first official Republican presidential debate of the 2016 U.S. presidential campaign were nil despite the fact the U.S. marijuana industry is booming. The national legal marijuana market is worth approximately $1.53 billion, according to a Nov. 2013 report from ArcView Market Research, a San Francisco-based investor group focused on the marijuana industry.  In five years, the estimated amount the national legal marijuana market will be worth is $10.2 billion, according to that same ArcView report.

Yet the 10 highest-polling candidates in the Republican 2016 presidential field took the stage at the Quicken Loans Arena in Cleveland and said not a word about marijuana legalization. Not even a whimper or a burp.

The estimated number of marijuana industry jobs that currently exist in Colorado is in the vicinity of 7,500 and 10,000, according to the Marijuana Industry Group, a trade association that advocates for responsible marijuana regulation. The amount in taxes and fees legal marijuana is projected to raise for the state of Washington over four years is $190 million. These statistics should all resonate with businessman and Republican frontrunner Donald Trump.

The point, my friends, is that you cannot speak intelligently about the U.S. economy without including a discussion of pot and how the plant should be regulated, decriminalized, and grown.

Marijuana undeniably impacts the prison system, banks, small businesses, patient care, and it shrinks the illicit drug market but no one from former Florida Gov. Jeb Bush to Kentucky Sen. Rand Paul broached the subject.  It is as though these conservatives found a condom wrapper in their teenage daughter’s bedroom and pretended sex is not happening.

Everything about Republicans, including their embryonic denial over the benefits of legalization, drives me crazy. They favor a weaker federal government and giving more power to the states in general, but when it comes to pot, a substantial bloc of the party wants the federal government to rein in the states.

The new Drug Enforcement Administration chief – Chuck Rosenberg – made it clear recently that marijuana is safer than heroin.  I’m so very glad he cleared that up for us.  This is the type of dumb liberal dude Republicans are up against on the biggest economic and social issue of our time.  If the Republicans can put up a candidate that has a workable template for legalization, I don’t see how Democrats can win the White House.