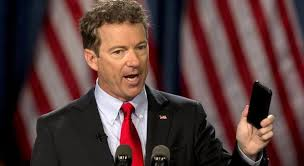 Case in point:  Mr. Paul (R-Ky.) is scheduled to hold a fund-raising reception at the Cannabis Business Summit where I’m currently digging my cowboy boots into the ground. The Summit is a major marijuana industry trade show in Denver, Colorado where top lawyers, doctors, business owners, and scientists congregate to discuss the emerging cannabis market.

Co-sponsored by the National Cannabis Industry Association (“NCIA”), the Kentucky senator will address medical marijuana policy and banking regulations for marijuana-related businesses.  Rand Paul does a decent job of making you believe he loves your liberty when it comes to pot. He calls himself a libertarian, although he is not a member of the Libertarian Party.  He cozies up to a less government philosophy but like virtually every other GOP candidate, he holds firm in his opposition to cannabis legalization.

“People who use marijuana all the time lose IQ points,” he told the Hoover Institute. He also said cannabis makes people lazy and stupid. Yet somehow he inexplicably finds himself courting those who made large sums of money helping others get high. Hmmm…

I find myself lukewarm in receiving him this week at the National Cannabis Industry Association in Denver.  I am a member of the NCIA and was invited to his speaking engagements, all for the posh starting price of $2,700.  The email invite declared, “Major Republican Presidential Contender at Cannabis Business Summit!”

If I were to attend a Rand Paul sermon (I will not) I would expect to hear a few things.  First, he will agree with me that putting people in jail for small amounts of cannabis must stop.  So far so good. I predict that is where all points of convergence end. Unless he agrees that the federal government should reschedule cannabis from a Schedule 1 to a Schedule 3 substance, we don’t have much else to talk about.

Paul has supported states’ rights to establish their own marijuana policies, and he has been a vocal supporter of decriminalizing or reducing criminal penalties for those arrested for marijuana possession. Nevertheless, Paul hasn’t championed the cause of full legalization. “I’m not really promoting legalization, but I am promoting making the penalties much less severe,” he told Fox News.  I suppose the media outlet to which he gave that quote says quite a bit about Rand’s pot-loving ways.

I hope I am wrong. After all, the Kentucky senator is the first major-party presidential candidate to publicly seek support from the legal weed business.At the same time, until Rand Paul actually becomes a libertarian, acts like a libertarian, and formally takes himself off the fence about legalization, he is a Republican masquerading as a libertarian. Rand Paul continues to serve the same Republican wine in a libertarian bottle.