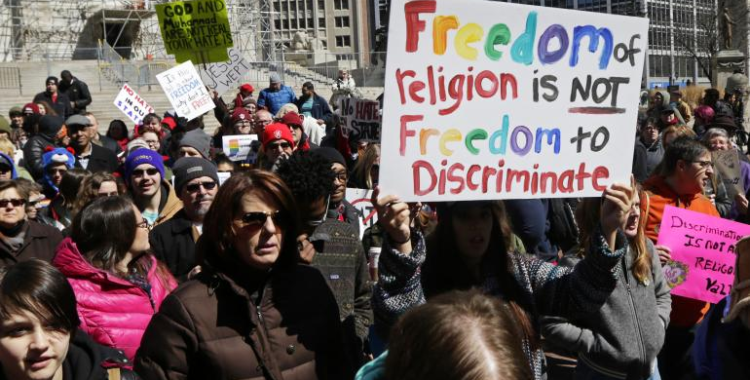 Jesus Christ.  Moses. Mohammad.  Confucius. Vishnu. No matter the savior, he or she will be my first witness in a lawsuit filed by my client, a gay man, against some insipid baker in Indianapolis, Indiana who refused to sell him a wedding cake pursuant to Indiana’s Religious Freedom Restoration Act (RFRA).

Whatever language you speak – whether it is bigotry or ignorance – those who defend Indiana’s RFRA have grossly expanded the scope of religious freedom for the very purpose of protecting discrimination.

Picture this: You accept service for the lawsuit, and your lawyer answers the suit.  She includes, as a defense, the recently adopted text from Indiana’s RFRA, which can be raised as a defense when someone is sued for discrimination because service to a homosexual would have burdened one’s “exercise of religion.”  We reply, alleging there is no relationship between your desire to victimize homosexuals and reject civil rights on account of the precepts of your faith.  Uh oh.

The first question I ask the baker, after he has spent about $25,000 on attorney’s fees is,  “What church do you attend?”  Your lawyer bellows,  “Objection.  Relevancy.”  The judge quickly snaps back, “Overruled.”  The Indiana RFRA permits as a defense to refuse service to gay people because of one’s “exercise of religion.”  Therefore, defendant’s real religion becomes key, because if it’s just politics created by the baker’s homophobic homies at his local church, that’s not the exercise of his religion.

After your overpriced lawyer’s objection is overruled, you tell me you are a Baptist.  I proceed to ask for a copy of your sacred text. I open it in front of you and inquire, “Point to a passage where it says you cannot sell goods or services to homosexuals.” You choke.  You cannot find that clause because it’s not there.

The subtext of this exchange illustrates the act of denying goods and services have nothing to do with a sincerely held religious belief. I will point out that Jesus met with criminals, thieves, and prostitutes but somehow selling a cake impacts one’s faith?

Regardless of what any Republican operative tells you, the Indiana law is unique to existing federal law because, for the first time ever, it permits this defense between individuals, not the individual against acts of the government, and this detail is tremendously material. RFRA laws carve out an exemption from general legal requirements for religious objectors unless the government can carry an especially heavy burden to show that the objectors should be required to comply with the law. While RFRA only applies to burdens imposed by the government, Indiana laws allow RFRA to be raised in lawsuits where the government is not a party.  Why are we bending over backwards to protect idiocy stemming from prejudice?

The super scary thing is that the same Supreme Court that decided Hobby Lobby last year could hold that religious objections trump pro-LGBT civil rights laws.  There are legal predators out there willing to represent the first “religious exemption” defendant who are dumb enough to play this out in court.