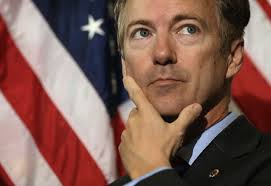 Rand Paul is a libertarian like the Olive Garden is an authentic Italian restaurant.  (My Jewish friends from Brooklyn make better spaghetti al pomodoro than the restaurant chain founded in 1982.)  For all the hoopla regarding Senator Rand (rhymes with “band”) Paul (R-KY) being the next great libertarian hope, I fail to see his libertarian stripes – they must be hiding under his thick head of red, blonde, and gray hair.  For many, the word that comes to mind when they hear the name Rand Paul is “libertarian,” but I am here to tell you that label is a misfire when talking about the junior senator from the Bluegrass State.

The Libertarian Party represents a political movement committed to free markets and lower taxes.  If Rand Paul wants to put down roots in the libertarian camp, he needs to tell me what that means for the economy, the environment, and education as virtually every position he takes is GOP gospel.  I would like to hear him address key party principles on personal and economic liberty, the NSA, and the legalization of marijuana.  Rand Paul is this side of the Mississippi’s version of the Olive Garden:  It looks like Italian food but leaves me profoundly unsatisfied.

Others have pulled off this switcheroo – at least temporarily.  Take Rep. David Jolly (R-Fla.), who sold himself as a fine libertarian wine while campaigning.  He talked to Millennial Voters about his libertarian loyalty but as soon as he won, he voted the GOP’s way.  For those of us who are Socially Moderate and Fiscally Conservative, we need more than the hope of less government.  Rather, we need candidates who vote their philosophies.

On virtually every issue, Rand Paul is a Republican despite his constant use of the trendier “libertarian” label. Paul recently stated, “I would introduce and support legislation to send Roe v. Wade back to the states.”  That necessarily means decisions about what women do with her bodies can be made by politicians like those in Virginia who want mandatory transvaginal ultrasounds for any woman seeking to terminate a pregnancy.  There is nothing libertarian about permitting individual states to violate otherwise constitutionally protected rights like abortion. With regard to legalizing marijuana, Rand Paul suggested not a socially moderate plan but a purely traditionalist one:  “The main thing I’ve said is not to legalize.”

Sen. Rand Paul, a likely 2016 presidential candidate, recognizes Republicans need to broaden their message to win.  He is helping the GOP’s cause by doing just that, namely, repackaging the Right’s beliefs in a more palatable parcel.  Do not make the mistake of voting for Paul because he is a libertarian supposedly committed to embracing scientific advancements or emphasizing individual rights and self-determination.  Make me believe you are a libertarian once, shame on you.  Make me believe you are a libertarian twice, shame on me.