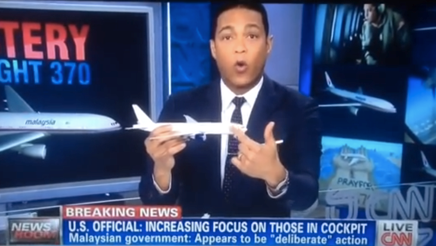 By the time this blog goes to print, the final resting place of Malaysia Airlines Flight 370 and its passengers, who left Kuala Lumpur, Malaysia for Beijing, China in early March will likely remain a mystery.  Much has been made of the nonstop coverage CNN devoted to the missing Boeing 777.  It has been alarming to watch a major cable network flail about so publicly with a story where there are so few verifiable facts.  Media outlets have gluttonously chomped on crumbs of information, regardless of how reliable they are.  For this, we can throw a few stones:

By far, the most important issue for the media has been the size of the search area, which today CNN announced had “shrunk” to 18,000 square miles.  CNN initially compared the search area to the size of West Virginia but then embraced the svelte shape of South Carolina (because obviously “The Palmetto State” is so much easier to visualize). The Chicago Sun-Times said the search area resembled Minnesota while the British press analogized it to Wales (The Independent).  We shouldn’t care about the size of the search area because even if we find the haystack, which now seems nearly impossible, locating the needle will be a thousand times harder.

During one riveting CNN broadcast, producers showcased multiple specialists in the field of airplane construction, crash reconstruction, accident investigation, flight simulation, sonar analysis, meteorology, and of course aviation law.  Once all of these split screen windows were closed like a terrible game of Hollywood Squares, only one truth was established: supposition, rough estimates, and assumptions are not worthy of a cacophony of “breaking news” chyrons.  None of these experts had actually consulted on the case.  I’d call their “contributions” dead weight.

Chinese search planes awhile back discovered what was publicized to be debris from MH370 but was later revealed as good old-fashioned garbage.  It became clear at that moment the media cared more about zombies than facts.

The monumental upheaval in Ukraine, deadly mudslides in Washington State, the Fort Hood shooting and the 50th Anniversary of the Civil Rights Act, which is perhaps the most significant legislation in United States history, received a mere footnote from the press when compared to coverage of the missing jetliner.

We want news.  When do we want it?  Now.  Noise from safety analysts and expedition logistics specialists (what the heck is that?) is not intelligence.  News needs less sizzle and more steak.  The Malaysia Airlines story has human agony: there were 239 people on board, and the ripple effect of that loss is immeasurable.  Do the networks care?  Ask journalist and CNN anchor Don Lemon who spends precious time on air playing with model airplanes.