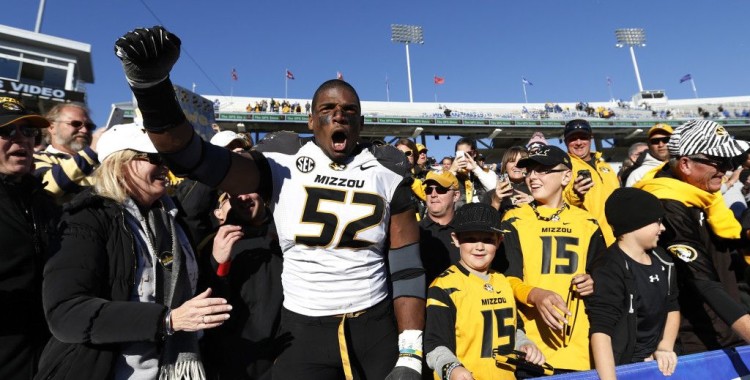 Michael Sam, a defensive lineman from Missouri and the Associated Press’ SEC Defensive Player of the Year, said he is gay in an interview with ESPN’s “Outside the Lines” on February 9.  My question, modest as it may be, is why do we even care about who is gay and who is straight?Why did every respectable publication and news outlet cover the 6-foot-2, 255-pound all-American’s announcement that he is a homosexual?

Sam told the ESPN and Times reporters that he came out before the 2013 season when, during a team gathering, each player was asked to reveal something about himself that no one knew. “We’re really happy for Michael that he’s made the decision to announce this, and we’re proud of him and how he represents Mizzou,” Missouri coach Gary Pinkel said in a statement.  Mizzou’s official Twitter account countered with a “proud of you” tweet and a picture of Sam with his arms outstretched in what appears to be a pregame introduction.  The NFL piggybacked on all this saccharine sweetness with a quote of its own.  “Michael is a football player. Any player with ability and determination can succeed in the NFL. We look forward to welcoming and supporting Michael Sam in 2014.”  That is touching and all, but why should society be privy to the sexual orientation of fellow Americans?

Of course Michael Sam’s coming out has mushroomed into a national story in part because the NFL never has had an openly gay player.  In an ideal world there would be no need to report about Sam’s decision to reveal he is gay.  Democratic U.S. Rep. Mike Michaud of Maine bravely announced in a guest op-ed in The Bangor Daily News this month that he was gay and then asked readers, “But why should it matter?”

If announcing one’s homosexuality is a story, how come journalists aren’t interested in New England Patriots quarterback Tom Brady’s heterosexual lifestyle?  Well, actually, they are, but I make mention of Brady to accentuate a critical point:  Does it really matter if an NFL player is married to a woman or a man? Will his sexual proclivities affect his ability to intercept the ball or run a screen pass?

The twenty-four year old Michael Sam, regardless of what he has achieved in his sport, will receive questions about whom he has been dating and how his sexuality affects him throughout his career.  Sam, projected to be chosen as high as the third round in May’s draft, can point to his résumé and that of his overachieving team. He had 111 / 2 sacks, 19 tackles for loss and two forced fumbles.  It is my hope that my daughter’s generation can live in a label-less society where a high-profile individual’s announcement that he is gay will not be the top story on Nightly News or, worse off, TMZ.com.