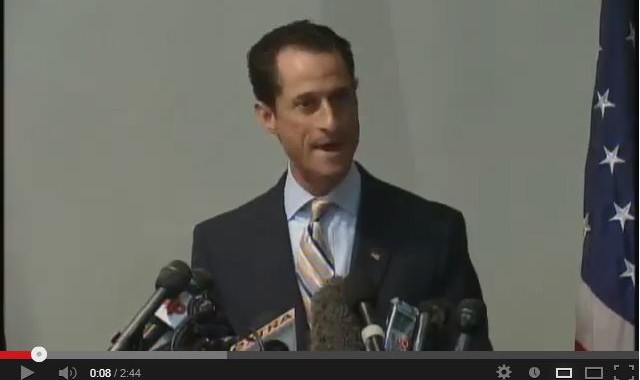 “Pictures get manipulated, pictures get dropped into accounts. We’ve asked an internet security firm and a law firm to take a hard look at this to come up with a conclusion about what happened and to make sure it doesn’t happen again.”  Anthony Weiner before resigning from Congress

Setting the Scene for Stupidity:  In a video released May 21, former Democratic congressman Anthony Weiner announced his candidacy for New York City mayor.  Weiner, who once represented parts of Brooklyn and Queens, famously resigned from Congress in 2011 because he used Twitter to send a link to a photo on yfrog of his erect penis concealed by boxer briefs to a 21-year-old female college student.  An encore presentation (unfortunately) ensued and images showed Weiner bare-chested in his congressional office.  After several days of denying media reports that he had posted the images, he admitted to having sent sexually explicit photos and messages to women both before and during his marriage.  My biggest beef with Weiner is that the man had no shame in lying about the photos and then deflecting blame.  That is not leadership, man.

Basis for the Dishonorable Nomination:  On June 1, 2011, Anthony Weiner gave a series of interviews in which he denied sending the salacious photos, suggesting that someone such as journalist Andrew Breitbart, had hacked into his accounts and published the photos.  Weiner also tried to argue that the images were doctored.  Want more damning evidence Weiner is a certified perjurer?  In the video he released to announce his candidacy for mayor, Weiner said that while in Congress he “fought to get sick 9/11 responders the help they deserved”.  The truth is Weiner joined the crusade during the 11th-hour push for the bill.  He was barely a chorus member among a sea of Daniel Day-Lewis types who unwaveringly fought for eight long years to get legislation passed that provided health care and compensation to sickened 9/11 workers.

Weiner’s bid for mayor is about gratifying himself rather than his constituents.  His pathetic plea is about his personal narrative of making a mistake, paying the consequences, and seeking clemency.  Find redemption on your own time.  New Yorkers are unwilling to help him work through his narcissistic and sociopathic proclivities.  Instead, Weiner should put his feet up on a buttery leather couch (remove all cameras as a safeguard) and allow Dr. Phil to work his magic.  Everyone has character flaws, but Weiner’s imperfections colored his ability to serve.  If Weiner has a political itch to scratch, let him represent the horticulture in Central Park.

The Anthony Weiner story has all the components for a compelling episode of The Good Wife.  However, contrary to what The New York Times Magazine wrote in April 2013, Weiner is neither the cat’s pajamas nor the toast of New York.  I would bet the Chrysler Building there is an effective candidate out there, and she would be refreshingly referred to as Ms. Mayor.