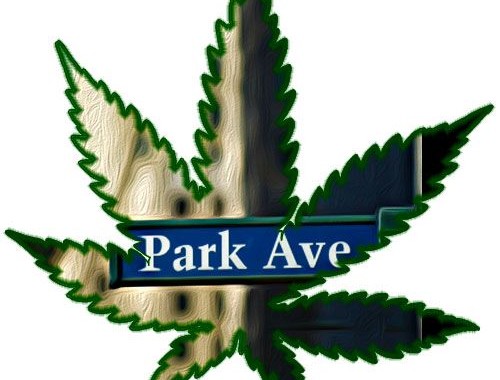 Did you ever wonder how Park Avenue princesses, ambitious politicians, publishing magnates, and Fortune 500 CEOs make success look like a piece of luscious dark chocolate layer cake?  They always appear to be high on something, and it’s not life.  There is a common misconception that only unemployed, tree-loving twenty-somethings smoke cannabis.  In fact, educated and career-minded Americans are lighting up their chic vaporizers in record numbers as a way to unwind after a stressful day at the top.

The upper echelons of society would prefer you not use the debauched term “pot” or “reefer” when denoting their favorite pastime.  Instead, they employ the word cannabis to describe the dry, shredded green and brown mix of leaves, flowers, stems, and seeds from the hemp plant Cannabis sativa.  Jon B. Gettman, PhD, a cannabis reform activist issued a report entitled “Marijuana Production in the United States (2006)” in which he revealed cannabis is the largest cash crop in the U.S. and estimated that domestic cannabis production was valued at $35.8 billion.

NBC’s Today Show recently did a “Stiletto Stoners” expose that introduced us to a Vogue editor who frequently smoked cannabis to decompress after a taxing day of what probably involved switching out Jimmy Choos for Christian Louboutins for a photo shoot.  According to the Today Show, there are approximately 8 million businesswomen in the U.S. who smoke cannabis recreationally.  Photographer and music video director Todd Appletree wrote in Town & Country’s January 2013 issue, “Creatively, marijuana can unlock a secret visual language.  I see patterns in colors and shapes that I wouldn’t perceive otherwise.”  Dr. Julie Holland, a psychiatrist from NYU School of Medicine told Matt Lauer the illegal drug could be more useful than alcohol in effectively combating insomnia, depression, and anxiety.

Yet it is not exclusively the top 1% that smokes cannabis. The Occupy Wall Streeters do a fine job of Keeping up with the Joneses, and they would have to be high on something to protest outside in NYC in December.  A 2009 study released by the National Survey on Drug Use and Health indicated 25.8 million people admitted using cannabis in the past year.  These figures have remained pretty much the same throughout this decade.

The sale and possession of cannabis for non-medical use is legal in Colorado and Washington. Fifteen states around the country have decriminalized cannabis possession.  The Aloha State recently announced that a bill to decriminalize the drug was unanimously approved by the Hawaii Senate.  Eighteen states allow cannabis sales for medical use to help patients cope with pain and chronic conditions, according to the National Conference of State Legislatures.  “Marijuana prohibition is on the way out,” explained Mason Tvert, communications director at the Marijuana Policy Project.

The next logical step would be for decriminalization of cannabis at the federal level or allowing states the choice to decide.  Considering this country has many well connected and affluent cannabis users, either route appears probable.  But the latter avenue of redress might just hold the key to Republicans recapturing the White House in 2016.