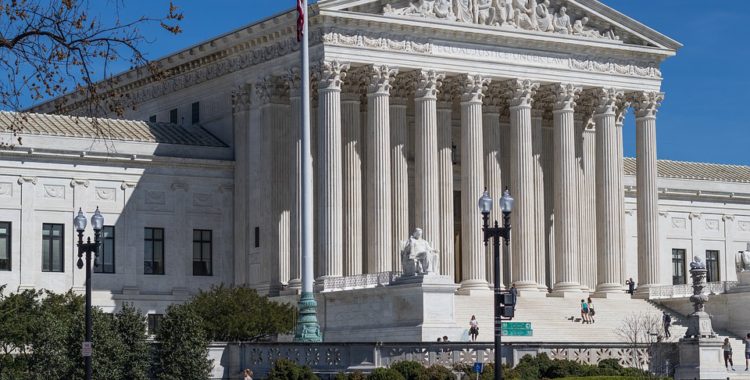 “I used to be invited to [parties] where [I] don’t know the host … And can I say that long, long ago, marijuana was maybe present at those parties?” – Justice Elena Kagan

Indulge me in a few pot puns as I’ve got to keep this piece as lighthearted as possible when the stakes are so high. U.S. Supreme Court justices often delve into the weeds of an argument although more often than not the argument has nothing to do with, well, legalizing weed. As you will read below, Notorious R.B.G. et al. are unafraid to be blunt when it comes to telling U.S. citizens that they cannot privately grow and consume cannabis even when state law would permit such use and consumption.

The quote from Justice Elena Kagan above was uttered during oral arguments for a case involving a party at a house in Washington, D.C., which was organized by a woman named “Peaches.” The party featured loud music, alcohol, and lap dances. After neighbors complained to police about the noise, Peaches admitted to the police that she did not own the property, so the police arrested the partygoers and charged them with trespassing. The people who were arrested sued the DCPD, alleging that the police did not have probable cause to arrest them.

When addressing the particulars of the case, Justice Kagan referred to her own past party-hardy experiences. Specifically, she reminisced about the gatherings she was invited to and, added coquettishly, where “marijuana was maybe present at those parties.” By logical reasoning, it’s safe to deduce, Justice Kagan, that there was marijuana at those parties.

The court isn’t considering a cannabis-related action but rather whether the D.C. officers were justified in making arrests at the party on Anacostia Avenue in March 2008. Sixteen of the partygoers sued the officers and city after the criminal charges were dropped, and a federal jury awarded $680,000 in damages that eventually reached nearly $1 million with legal costs. The city went to the U.S. Court of Appeals for the District of Columbia Circuit, and a divided three-judge panel sided with the partygoers, finding that the officers were not immune from legal action for the unlawful arrests.

Will Justice Elena Kagan be on the right side of history when it comes to deciding the next watershed marijuana case? Gonzales v Raich was a landmark case decided against the cannabis industry long before Justice Kagan served on the Supreme Court. In 2005, SCOTUS rendered its judgment with a 6 – 3 decision to uphold the Controlled Substance Act. The justices came to that decision by leaning on the Supreme Court precedent in Wickard v. Filburn (1942) that allows the federal government to regulate essentially all commerce that occurs within the U.S. In Gonzales, the court held that under the Constitution, Congress may use its Commerce Power to ban medical marijuana, even though it was permitted under state law.

Many legal analysts believe it is wrong to conclude that because an activity “substantially affects” interstate commerce it follows that Congress may regulate it. Gonzales stands for the proposition that the federal destruction of privately grown/consumed medicinal marijuana plants under the CSA is constitutional, even in states that had legalized such growth. The chief problem with Gonzales is that countless activities substantially affect commerce without being constitutional targets for Congress. As such, under the Constitution, Congress may regulate, ban or exercise some minor authority of marijuana from interstate and foreign commerce but a faithful reading of the Constitution illustrates that it may not constitutionally regulate or prohibit in-state growing, processing, or use.

Sometimes in the law – as in life – it’s the thought that counts, and clearly in Gonzales v. Raich reasonable, analytical thought counted for nothing. No intellectually honest judgment happened at the highest level of our judicial system. That’s a problem.  If we are to move the needle, we need something more than nebulous thoughts about social parties with pot.