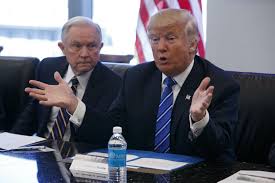 In case you missed any airing of cable news programming over the past few days, Jeff Sessions, the nation’s senior law enforcement official, and Donald Trump are at war. And usually the White House wins these kinds of wars. Boy, are things looking up for cannabis consumers.

A little background on Attorney General Jeff Sessions and marijuana: The Department of Justice (DOJ), as a result of Jeff Sessions’ desires, has sought a crackdown on cannabis. He has moved to reinstitute mandatory minimum sentencing and embraced 1980s rhetoric, shepherding Nancy Reagan’s debilitating, tragic, and baseless “Just Say No” campaign. Since coming to office, Sessions asked congressional leaders to remove federal protections that stopped the DOJ from interfering with medical marijuana bills that operated in accordance with state law.

Sessions, one of President Trump’s firmest supporters during the presidential campaign, has recently been called “weak” and “beleaguered” on Twitter by the commander-in-chief. President Trump told reporters in the Rose Garden on July 25 that he would not have chosen Sessions for attorney general if he had known Sessions would be recusing himself from the federal probe looking at Russia’s efforts to influence the 2016 presidential election.

“I’m disappointed in the attorney general,” Trump said. “If he was going to recuse himself, he should have told me prior to taking office, and I would have picked somebody else. I think it’s unfair to the presidency.” Trump said he was “very disappointed” in Sessions during a press conference with Prime Minister Saad Hariri of Lebanon. He also stated that “time will tell” if he remains Attorney General. Those are some fighting words.

Don’t mess with New Yorkers, whether its Donald Trump or Marvin Washington. These days Sessions is taking hits from every angle. Former New York Jets defensive end Marvin Washington, who won Super Bowl XXXIII in 1999 with the Denver Broncos, is suing the head of the DOJ to decriminalize marijuana. The suit alleges that the government has “wrongfully and unconstitutionally criminalized the cultivation, distribution, sale, and possession” of marijuana under the Controlled Substances Act (CSA), which became law in 1971.

The lawsuit was filed in a federal district court in New York City. Other plaintiffs include an 11-year-old boy who requires medical marijuana to control his epilepsy, and a disabled military veteran who uses it to control post-traumatic stress syndrome.

The lawsuit challenges the law’s classification of marijuana as a Schedule I substance ― meaning it is considered as dangerous as drugs like LSD and heroin. The CSA prevents Washington from obtaining federal grants to open a business that would allow pro football players to use medical marijuana for pain management in lieu of more addictive opioids.

The very notion that President Trump is considering replacing Attorney General Jeff Sessions, a staunch opponent of marijuana, is cause for celebration. Session’s relationship woes with Trump will blow up like all of Trump’s professional and personal relationships.  Whoever thought a petulant, bullying, and trolling child could be good for marijuana? Now there is reason to hope.