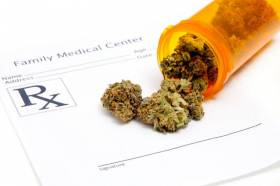 In 2737 B.C.E., we have the first recorded use of cannabis as medicine by Emperor Shen Neng of China. For thousands of years marijuana was a legitimate medication. The drug’s efficacy and popularity as a remedy is well documented.  Yet only 23 states allow access to medical marijuana; researchers are being stonewalled; and the federal government insists on keeping cannabis classified as a Schedule I drug that has no medicinal value.  But thanks to a series of papers in The Journal of the American Medical Association (JAMA), our politicians may soon be forced to reject the War on Drugs.

The new review, commissioned by the Swiss Federal Office of Public Health, concluded that there was “moderate-quality evidence” from at least a dozen studies showing that cannabinoids – chemicals in marijuana that produce pharmacologic effects inside the body – reduced pain in such patients by modest amounts.

The studies concluded that physicians, not politicians, should educate patients about medical marijuana to ensure that it is used appropriately and that patients will benefit from its use.  This flies in the face of the federal government’s stance that marijuana must be classified under the Controlled Substances Act as a Schedule 1 drug, which means it lacks medicinal value.

The lack of medical value of cannabis was one of the primary reasons cannabis is a Schedule 1 drug.  To have one of the most prominent publications come out in support of it as medicine may change the game for the federal government.  Note, too, that it is through peer-reviewed publications like JAMA that major developments in medicine often get their start.

The JAMA studies are good news, but not great, for medical marijuana advocates. Currently large-scale medical marijuana research is a pipe dream. Marijuana is the only Schedule I drug that the Drug Enforcement Administration (DEA) prohibits being produced by private laboratories for research. The federal government limits assembly for research to just one facility at the University of Mississippi.

On July 8, House Republicans let a bipartisan cannabis proposal – which would have reclassified marijuana so that national laboratories could conduct “credible research on its safety and efficacy as a medical treatment” – wither and die. The amendment would have encouraged the National Institutes of Health (NIH) and the DEA to work together to allow studies of the benefits and risks of marijuana to treat cancer, epilepsy, glaucoma, and post-traumatic stress disorder, among other conditions.

Despite the fact that nearly half the states have laws allowing access to medical marijuana and four states legalized the drug for recreational purposes, the therapeutic benefits of cannabis have long been among the most difficult subjects to study in the United States.

The National Institute on Drug Abuse (NIDA), the only legal source of marijuana for research, controls cannabis studies. Scientists would prefer the option of obtaining marijuana from different sources, which is permitted for other Schedule I drugs. They argue that abolishing the NIDA’s domination on marijuana, which is produced by a single contractor at the University of Mississippi, would improve variety and quality while making it possible to pursue approval of cannabis by prescription.

While the NIDA recently increased funding to the University of Mississippi to expand its marijuana production, non-government-controlled facilities should be able to grow cannabis for research as well.  Until then, examination (and progress) is being held captive. But the JAMA studies prove that the science IS there. No longer do medical marijuana proponents need to rely on meager anecdotes about the benefits of cannabis.