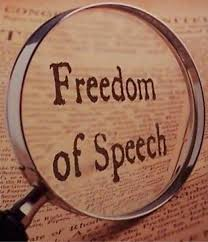 Offensive, bigoted, and even idiotic speech is good.  I would gladly defend the right of satirical magazine Charlie Hebdo to publish inflammatory cartoons of the Prophet Muhammad in the wake of the massacre by Islamic extremists at its Paris offices and subsequent attack on a kosher supermarket in which three gunmen killed 17 people.

France has broad protections for freedom of expression, but it also has tough laws against hate speech, including Holocaust denial and anti-Semitism, as well as a law making it a crime to condone acts of terrorism. The United States routinely tinkers with restrictions designed to appease the sensibilities of purists in the name of “good taste.”

Lenny Bruce, the Father of Obscenity, was habitually arrested in the 1960s for his comments about sex and politics.  Jello Biafra, the lead singer of the punk rock band the Dead Kennedys, was prosecuted in the 1980s for the inclusion of a penis embossed album cover.  Jerry Falwell of the Moral Majority sued the King of Smut, a.k.a., Larry Flynt, after the latter printed a satirical advertisement suggesting Falwell had lost his virginity to his mother in an outhouse.  Taking the case to the U.S. Supreme Court, Flynt won, protecting your right, my right, and Aunt Edna’s right to express ideas others would find offensive.

Art, whether it takes the form of music, photography, design, installation, or drama will always be offensive to someone who will seek to limit its reflexive expression and reach.

In the wake of the Charlie Hebdo bloodbath, we should seek to preserve our right to free speech now more than ever.  We must recognize that if we aren’t hearing offensive speech, we should be very afraid.  Censorship and dictatorships didn’t work for North Korea or Cuba, and they won’t work for the U.S. or France.  The fact that we are hearing things we find distasteful means we are living in an open and free society.

Pope Francis said on Jan. 15 that there are limits to freedom of speech, especially when it insults or ridicules someone’s faith.  But can we be so naive to think that we have similar sensibilities about speech that offends us all or insults none of us?

If you do not like someone’s art or manifestation of expression, you can certainly look away, like I recently did when Rep. Randy Weber (R-TX) equated Obama to Hitler. “Even Adolph Hitler thought it more important than Obama to get to Paris. (For all the wrong reasons.) Obama couldn’t do it for right reasons,” the tweet read.  Apparently, Representative Weber failed to understand comparisons to Hitler are usually nonstarters, because really, no one is like Hitler.  But he said it, I heard it, and I ignored it.

We cannot use the fear of exposure to block creative expression no matter how distasteful or lascivious the speech is.  In a civil society, we must fight for the right to read and speak about things that are offensive.