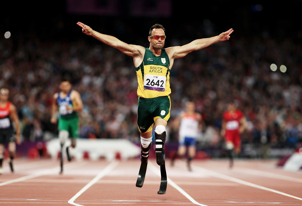 Former Olympian Oscar Pistorius is a contradiction in terms: Pistorius achieved global fame as an outstanding double amputee sprinter who ran with special prostheses that earned him the nickname “Blade Runner.”  He was the first double amputee to compete at the non-paralympics level against able-bodied competitors during the London Summer Olympics in 2012.  Superman Pistorius also shot and killed the ravishing twenty-nine year old supermodel Reeva Steenkamp, for which he now stands trial for intentional murder.

The highly revered hero of the South African people shot girlfriend Reeva Steemkamp shortly after 3 a.m. on Valentine’s Day in 2013—that much is clear. What isn’t so black and white is whether Pistorius slayed his girlfriend in cold blood or whether her death was the result of an accidental shooting.  The world-famous athlete will have to answer questions about why he shot Steenkamp four times from close range through a locked toilet door, hitting Steenkamp in the hip, right arm and head, killing her.  If Pistorius is found guilty, he could face life imprisonment.

Pistorius alleges that he mistook Steenkamp for an intruder and was fearful of burglars since he said he had been a victim of burglaries.  That defense is not worth its weight in gold: Officer R.H.A. Maritz testified during the trial that there was relatively little crime in Pistorius’ gated community and also cited the fact that police had no record of a crime against Pistorius in the three years prior to the killing.

Prosecutors say Pistorius argued with Steenkamp before he shot her with his 9 mm pistol. There was virtually unshakable evidence from five of Pistorius’ neighbors that they heard a female screaming, meaning Pistorius knew who he was shooting.  Pistorius says he was the only person to scream and his defense team is set to introduce noise tests to show neighbors are mistaken about hearing a woman’s voice.

Pistorius has sometimes reacted emotionally during the prosecution’s case, shedding tears during testimony of text messages that he and Steenkamp exchanged in the weeks before he killed her.  Anyone would cry with worry if text messages shown in court painted a picture of a jealous and possessive boyfriend who often “snapped” at Steenkamp and accused her of flirting with other men. At other times, Pistorius has appeared calm, taking notes during testimony and conferring with his lawyers. Additionally, he has vomited at a pathologist’s descriptions of Steenkamp’s gunshot wounds. I have not seen this many character transformations since Matt Damon’s tour de force in The Talented Mr. Ripley.

There are no jury trials in South Africa, and Judge Thokozile Masipa, who is assisted by two laypeople called assessors, will ultimately decide the fate of the “Blade Runner.” If the North Gauteng High Court in Pretoria does not lock up Pistorius and throw away the key that would signal to me the South African criminal justice system is just as damaged as our own.