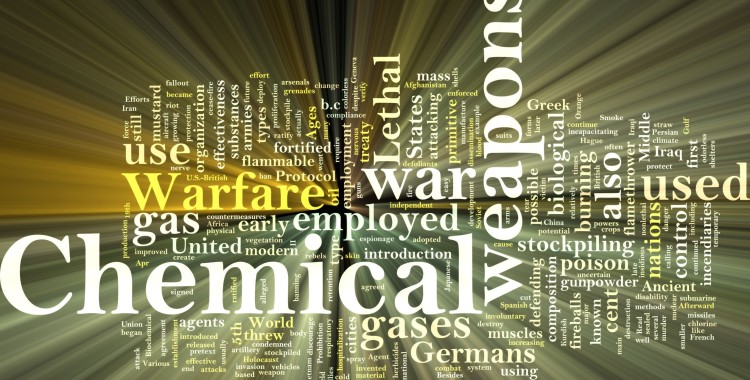 “We have been very clear to the Assad regime…that a red line for us is we start seeing a whole bunch of chemical weapons moving around or being utilized. That would change my equation.”  President Barak Obama at the White House on Aug. 20, 2012.

Setting the Scene for Stupidity:  Chemical weapons appear to be the raison d’êtrefor troops to get involved in a bloody nightmare thousands of miles away in Syria.  The White House implicitly said as much when the Obama administration inched closer to a decision on how to strike Syria once Secretary of State John Kerry declared it was “undeniable” Syria had used chemical weapons in a deadly attack last week.  Lest the Commander-in-Chief forget conventional weapons are horrific too; explosives and artillery cause dismemberment, brain damage, severe burns, paralysis, and collapsed lungs.  The official White House message is that as long as President Assad’s sadism is of the conformist nature, the U.S. will tolerate it.

Basis for the Dishonorable Nomination:  Nuclear weapons need a new PR team because they get a bad rap for being worse than conventional, kid-tested, Obama-approved killing devices.  Yes, chemical weapons are able to murder large numbers of people all at once and can jumpstart death by slaughtering millions with the press of a button.  But they are not any more gruesome than semiautomatic arms or bombs.

Conformist weapons in Syria’s two-year-old civil war have killed more than 100,000 people compared to the 355 victims of chemical weapons, according to Doctors Without Borders.  Yet Assad’s forces, who tortured, burned, shelled and buried alive civilians (I thought they only did that on Days of Our Lives) somehow did not cross Obama’s crimson-colored line.  To be clear, international law does not treat chemical weapons differently than conventional weapons but the United States’ fantasy statute defines our means of warfare as ordinary and any other means as extraordinary.

The real reason our government treats chemical weapons differently from conventional artillery is because they are a terrorist’s dream.  They tend to be relatively portable and give a radical the theoretical ability to kill large numbers of people in a dense area. What’s more, some nineteen-year-old studying for his Applied Science degree could create chemical weapons in his parent’s basement.  But that’s not Obama’s overt message.  Instead, he blames non-conventional chemical weapons for mass casualties.  Murder is murder, whether by flood, fire, a forty-five or a deadly concoction of chemicals.

Saddam Hussein’s gassing of the Kurds was an oft-repeated rationale for the 2003 invasion of Iraq.  Now Syria is an even scarier beast to tame because the United States has no natural allies there.  Iran and Hezbollah, hardly our BFFs, back the Syrian government and the rebels include extremist groups tied to al-Qaida.  This chemical weapons issue should give Obama pause: No one is looking for a sequel to Iraq.