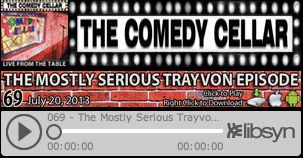 Expert legal commentator and Tampa resident Ted Corless is elated to announce his New York City debut on the RiotCast Network’s informative and dynamic “Live from the Table” panel.  After a fantastic reception for his nationally syndicated radio show, News Munchies with Ted Corless, and unparalleled success on newsmunchies.com, the RiotCast Network enthusiastically invited Ted Corless, the only guest star, to provide pivotal legal commentary on the George Zimmerman case.  The live taping, which took place July 18, 2013, at New York City’s Comedy Cellar, featured Ted’s adept and entertaining observations on everything from Florida’s Stand Your Ground law to the twenty-seven pages of jury instructions to Florida’s gun laws.  To listen to the broadcast, visit: http://www.newsmunchies.com/2013/07/top-florida-attorney-ted-corless-joins-riotcast-network-s-nyc-panel-to-debate-george-zimmerman-case/.

Meanwhile, the nation remains gripped by larger legal, ethical, and racial questions concerning the case.   On July 22, the Sanford Police Department turned over all evidence, including a gun, to the Department of Justice.  Ted is perfectly poised to describe in detail how federal officials will weigh whether to pursue a civil rights case against Zimmerman.  Ted is ranked “AV” by the Martindale-Hubbell® system for being recognized by his peers as having the highest level of excellence and professionalism in the law.  He is the preeminent legal mind to articulate why the jury’s decision continues to agitate the country, with protests, calls for federal intervention and the reason for nonstop debate about whether race played a role in the shooting and trial.

MEDIA OPPORTUNITIES: Ted Corless is available for bookings as a political and legal contributor for local and national interviews.  He is saucy, dynamic, controversial in all the right ways, and a natural problem-solver.  Contact Julie Robbins at julie@ideaworkscreate.com/(813) 448-7717 or Stacy Slotnick, Esq. at stacy@ideaworkscreate.com /(646) 300-1277.

About Ted Corless and News Munchies.com:

Ted spent nearly two decades representing the world’s Big Tobacco, Big Oil, and Big Insurance companies before he formed his own firm, Corless Barfield Trial Group in Tampa, FL.  He uses his inside track knowledge of the insurance industry to sue insurance companies on behalf of aggrieved policyholder clients in first-party property insurance disputes, including cases involving the perils associated with sinkhole, windstorm, fire, and blasting activities.  Importantly, Ted continues to spend time in the legal trenches working for marginalized people, including those living in poverty.  In his recently launched news talk radio show, News Munchies on 970 WFLA and iHeart Radio, Ted utilizes his rich oratory skills and political and legal prowess to affect change to help people get informed to get over it, e.g., find solutions without getting bogged down by political rhetoric.  Ted’s forthright personality combined with his intelligence is the perfect combination for titillating discussions that propel action forward and keep audiences salivating for more.  Ted makes no apologies for being a foot soldier in today’s revolution – ready to fight for what is right about America. For more information, visit www.newsmunchies.com.